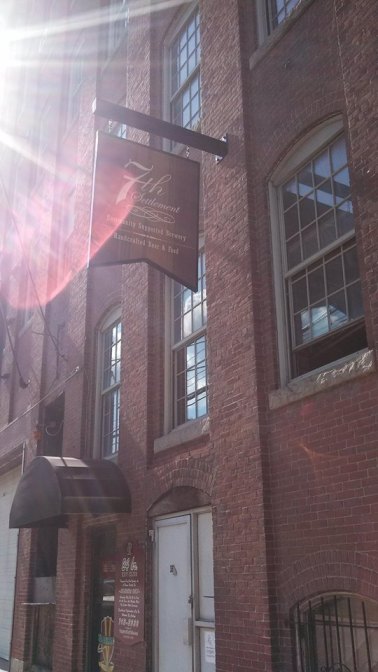 I don’t know if it’s because beer is perceived as a “dude thing” or if it’s because beer making and tasting has become a haven for snobs, contrarians and haters, but I find writing about beer very intimidating. Coming up with the words to describe the beer before me is far more of a struggle than writing about wine or spirits. The accepted language for those beverages is so much more forgiving and subjective, but with beer, if you don’t have your hops, malt and yeast palate honed razor sharp, you open yourself up to rigorous ridicule.

That’s probably why I took a more nostalgic look at the new Dover brewery, 7th Settlement. The quality of beer, the menu and the over all feel of the bar and dining room is such a gargantuan leap above the shit-holes where I once drank in Dover, I felt it needed mentioning. You will see me shy away from getting too deep into the beer tasting notes, for the above reason. No amount of liquid courage this day could conquer my fear of the critics.

7th Settlement picks up the craft beer mantle in Dover

When I last lived in Dover, there were very few places to go for a beer. This is many years ago, before the Barley Pub and the Brick House. Those places had just opened by the time I packed up my belongings and moved to Portsmouth. In the years since, many of my Portsmouth friends have moved back to Dover, a far more affordable place to live and do business, and as they’ve gotten to know Dover, I too have gotten to know Dover again.

I was sad to hear the Barley Pub closed down earlier this year. That establishment deserves a lot of the credit when it comes to making Dover nightlife what it is today, proving that a chill place to grab a beer and listen to live music could be done in Dover. Up until the Barley Pub opened, it was a town of rowdy beer halls and sports bars.

The Barely Pub will be missed by many, but its departure was almost simultaneous to the opening of 7th Settlement brewery at 47 Washington Street. Founded by two young entrepreneurs, Dave Boynton and Josh Henry, 7th Settlement is billed as New Hampshire’s first “community supported brewery.” This new kind of brewery runs similarly to community supported agriculture, where patrons buy in to the business of producing an edible product, reaping special benefits in return.

The founders are dedicated to supporting local farmers when it comes to making their beer, and when it comes to the food they serve in the brew pub. A few weeks ago, I met some friends there and was knocked out by the stylishly revamped mill space. High ceilings, exposed brick walls, room-length bar with plenty of high-top tables for meeting and eating with friends. In the back was a separated space, which I soon learned was for families. While this may seem somewhat cruel to quarantine parties with young children to a separate eating area, my husband and I breathed a sigh of relief when we realized we could let our daughter squeal and run around the table without child-free parties staring us down.