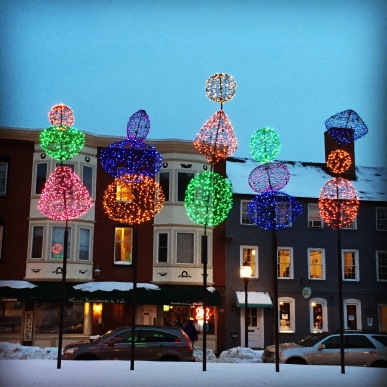 Winter in Portland, just as nice.

I’ve loved Portland, Maine for a long time. It’s where I got engaged and where I’ve spent nearly every birthday since. It’s a city I visit with friends and go to visit friends. I walk the waterfront and the Eastern Promenade. I eat and drink and repeat. It’s almost criminal how many great places there are to get a beer, a cocktail you’ve never tried before or a dish that will leave you licking the plate. When my friend and editor of Market Watch magazine asked if I wanted to write a profile about the city’s beer, wine and cocktail scene, I didn’t have to think about it for long.

I contacted dozens of restaurants, bars, distilleries and breweries. The ones featured are places I love, but I easily could have included more. It’s a story that helped me make some great contacts in Portland and one I hope leads to more profiles of the city.

“The Other Portland” is only available in PDF form, so please click through if you’d like to read the rest.

Walk into Pai Men Miyake, a noodle bar in Portland, Maine’s Longfellow Square, and one of the first things you see is the craft beer list. On a prominently displayed chalkboard adjacent to the front door, guests can scan the list of 12 draft beers when they walk in. Half of the venue’s taps and six of its 12 bottles are reserved for regional craft beers, which are regularly rotated, offering patrons an opportunity to try the latest local expressions.

Steaming bowls of ramen, such as the Kimchee Beef with braised short rib ($13), are commonly ordered with a Mainebrewed draft like Bissell Brothers’ The Substance ale ($7 a 16-ounce pour) or Oxbow Farmhouse pale ale ($6 a 12-ounce pour), says bar manager Jack Van Paepeghem. The menu also includes Japanese beers, such as Sapporo, which is $3 a 16-ounce pour during happy hour.

A casual Japanese restaurant may not be the first place Portland visitors look to find a robust craft beer program, but Pai Men Miyake is considered a top spot for sampling local beer and was on Eater.com’s 2013 list of “14 Essential Maine Craft Beer Bars.” Van Paepeghem says customers usually look for locally made beers, whether it’s a Pilsner or a darker brew. “My responsibility is to keep a balance,” he says. “I could have 10 IPAs if I wanted, but that’s not my style.”

Heather Sanborn, co-owner of Rising Tide Brewing Co. and president of the Maine Brewers’ Guild, says Portland residents expect a well-curated craft beer menu stocked with Maine products at local bars and restaurants. “New places in the Portland area need to have a significant beer program,” Sanborn says. “They’re not so much putting Bud Light on tap, but instead building a strong regional craft beer plan. It’s become as important as having a good wine list—or maybe more important.”

To read more, go to: Market Watch, “The Other Portland”