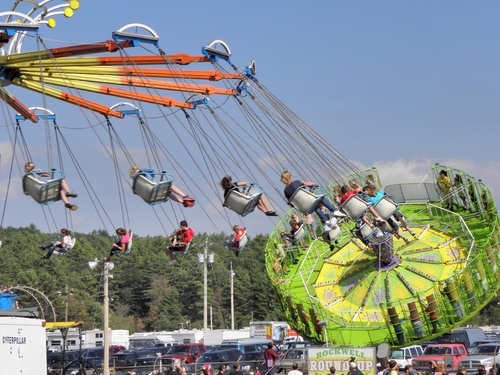 Each year in March and early April, Miami-Dade hosts a fair and exhibition, one of the few times of year the weather is cool and sunny like a New England fall day. The Miami Fair is everything you would expect from such an event: food, lame shows, rides, bad art exhibitions. But of course it’s Miami, so everything is a little gaudier, a little more extreme.

When I lived in Miami in the late ’90s, there were a series of AV club-style commercials for the fair on the local television stations. Because I was always very broke and couldn’t afford cable, I was often watching some game show or syndicated sitcom on these local stations, which gave me ample exposure to the Miami Fair advertising strategy. These commercials featured flashing lights, quick shots of exciting rides and young people taking huge bites out of cotton candy and hot dogs. At the end, a chorus of cheesy singers would belt out in an ascending melody, “Be there, the fair, be THERE!”

Around the 10th time my roommate and I heard this catchy tune, it was permanently ingrained in our memories. We would sing it as often as we could comically fit it into conversation. If someone asked if we were going to a party, the response was, “I’ll BE THERE!” Or if I ran into my roommate on campus, we’d spontaneously break out our beloved fair song. I could still sing you this song today.

Now I live in New Hampshire, which is the heart of fair country. Each fall when my friends and I go over which fairs we want to attend, I annoy them to no end with this stupid song. Unfortunately, they didn’t get to hear how great it really was.

After a quick search, I found a toned-down modern version of the commercial, which doesn’t quite have the exuberant singing I remember, but it will give you an idea of what I’m talking about. I also wrote a Stay Work Play post about my secrets to successful fairing, which I sample below.

The Fair, Be There

The end of summer is such a bittersweet time of year. The hottest days are behind us, the swimming is a whole lot colder and everything seems to end earlier in the evening now that people are back in school.

But the end of summer and beginning of fall also brings us fried dough, the Tilt-A-Whirl and animal exhibitions. That’s right. I’m talking about the fair.

New Hampshire is lucky to have so many great agricultural fairs. I’ve done most of the fairs on the east side of Interstate 93 and a few in Maine and Massachusetts. For the past few years, my friends and I have invested serious time and money into studying the art of fair-going and I can confidently say we have perfected the trip to the fair. Here are my tips for maximizing your time this fair season.

Many people will disagree with this, especially those who like rides. But now that we are all a little older and wiser, can’t we just admit we go to the fair for the food? Why torture yourself longer than you need to?

I usually go with a decent-sized group of people, maybe 5 or 6, all of whom I am comfortable with sharing food. This is the only way I have found you can make it through the wealth of so-bad-for-you-it’s-good cuisine each fair offers. Once you arrive, take a tally of what everyone wants to eat. Then get something right away that’s easy to share, like French fries or a bloomin’ onion. Snack on this as you stroll up and down the food aisles looking for the special fair treats you want. I get a turkey leg and give my friends take a few bites. Another friend gets deep-fried Twinkies, which everyone wants to try, and yet another friend buys a giant root beer with a keeper cup which we can sip to wash down the feast.